Transverse plane through the thorax at the level of the 4 chamber view.
However, only one ventricle is visible, containing the moderatorband.
At the left side a very small residual ventricle is visible.
The left atrium is smaller than the right atrium.

Right ventricle with 1 unidentified outflow tract.
In this clip the foramen ovale and pulmonary veins entering the left atrium are clearly visible.

Clip with color Doppler.
In blue the inflow in the ventricle.
In red the aorta.
At the end of the clip is visible that this large vessel continues into the aortic arch (becoming blue because direction turns towards the spine).
The crossing pulmonary artery is visible in a blue-white signal (aliasing).
This is increased velocity across the pulmonary valve with in red the reversed flow in the ductus arteriosus.

Transverse plane in the upper part of the thorax at level of the 3VTV.
The duct is a bit tortuous and red (reversed filling).

Aortic arch, arising too anteriorly.
The ascending aorta is a bit too large.

Aortic valve annulus.
4.4.mm is too wide for 20 weeks’gestational age. 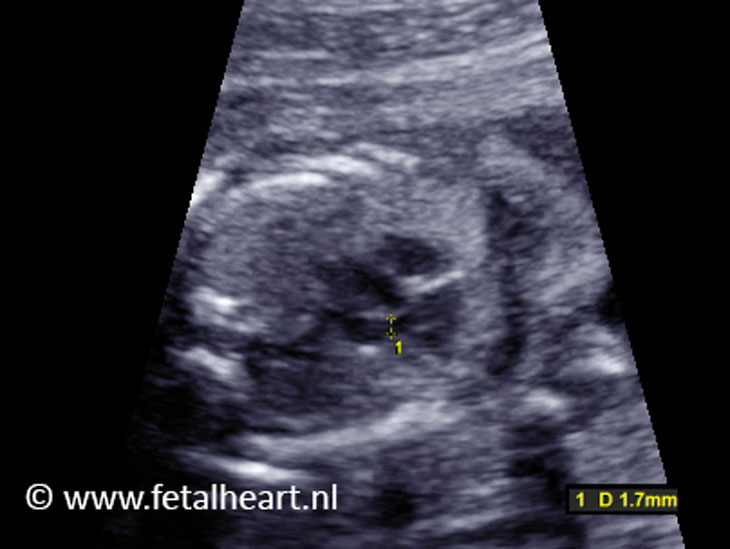 Measurement of the pulmonary valve.
1.7 mm is too small for 20 weeks’ gestational age.